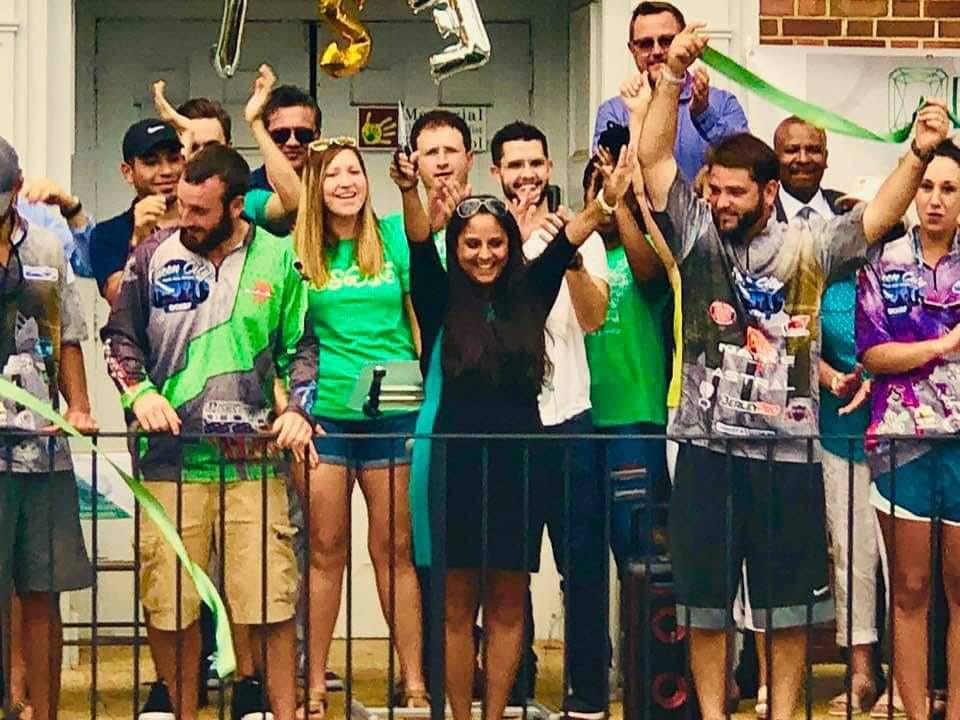 Wow. What an amazing, epic, historic event happened here in the Queen City tonight. Yes the Kiddie rod event was a hit, but, the ribbon was cut on the first ever South East recovery high school. Here in our city. Emerald School of Excellence is open for buisness, and Queen City Kayak Bass Fishing LLC was holding the ribbon at the ceremony.

Lets start at 5am on MIL. Well….MIL again lol. 37 anglers showed up eager to cast 29inch push button, character rods. Read that again. 37!!!! Kiddie rods in hands. Smiles, jokes, all around happy and childish, in a good way, environment. We launch at 6am. Not sure what was to be expected. MIL, August, 88 degree water at 6am. If we have learned anything in 5 years its that someone will catch them! It was fun to sit back and watch the guys weigh in today. Brad Cox took over for me as I prepped the food and stuff. The excitement, the stories. All around fun.

Before we announced all top 6 cashing spots, we had a great meal on the grill Jacob Earnhardt cooked 40 hamburgers and 40 hotdogs for all. Along with chips, cold drinks and good company, the building was lit up.

When the smoke settled, Chris Goodwin continued his dominance. He had a solid limit of 60.5inches. Enough for 1st place. He also won the Yak Bass’nsmall bass pot with 6.5inches. He then got lucky in his raffle and won the Slayer XC from @Native Watercraft, and the paddle from @bending branches When its your day, its your day!!! Congrats man!!!!
2nd place went home to last year’s Kiddie rod champ. Jason Lowe. He had 60inches today and went home with a sweet prize pack. 3rd place, the current MIL champ Graham Reay. 56.5in. Congrats!!! 4th place Fat Larry back in the mix. Aka Jason West. 56.25. 5th place, a guy we all like to give a hard time, but hes now rocking back to back cashes. Nick Huddleston. 55.5in. Sneaking into the top 6 Hal Brawley with 50.75!
Anglers went home with Custom Emeralds, baits from TrueSouth Custom Lures, Bizz Baits, 412 Bait Co, Line Out Custom Tackle LOCT, TRC Covers, Hoo-Rag. Items from Rusty Hooks Bait and Tackle. Bending Branches, @libertyoutdoors, and of course @native. Our Big bass pot was split today. The Jason’s each had a 19inch and split the entry into the Sept event.

As a club we raised $1520 today for ESE. Joey Randall also raised another $60 via Corn hole event at the BBQ. Congrats Jacob on that win.

The ribbon cutting tonight, combined with the tour was phenomenal. It meant the world to me that Chris, Jacob, Ryan Hulsey, Fat Larry, Melissa Switek, Larry Crider, Van Barkley, all stayed through the entire thing. It was hot, and late. But you supported who supports us. Thank you again.

I guess its a good time to drop some news….Emerald will be a Title Sponsor in 2020!

We have a full month to forget MIL, I mean recover. We are at Lake Norman next month presented by KFWC and Santiago. We will be being hosted by @denver Tackle co. See you all then !!