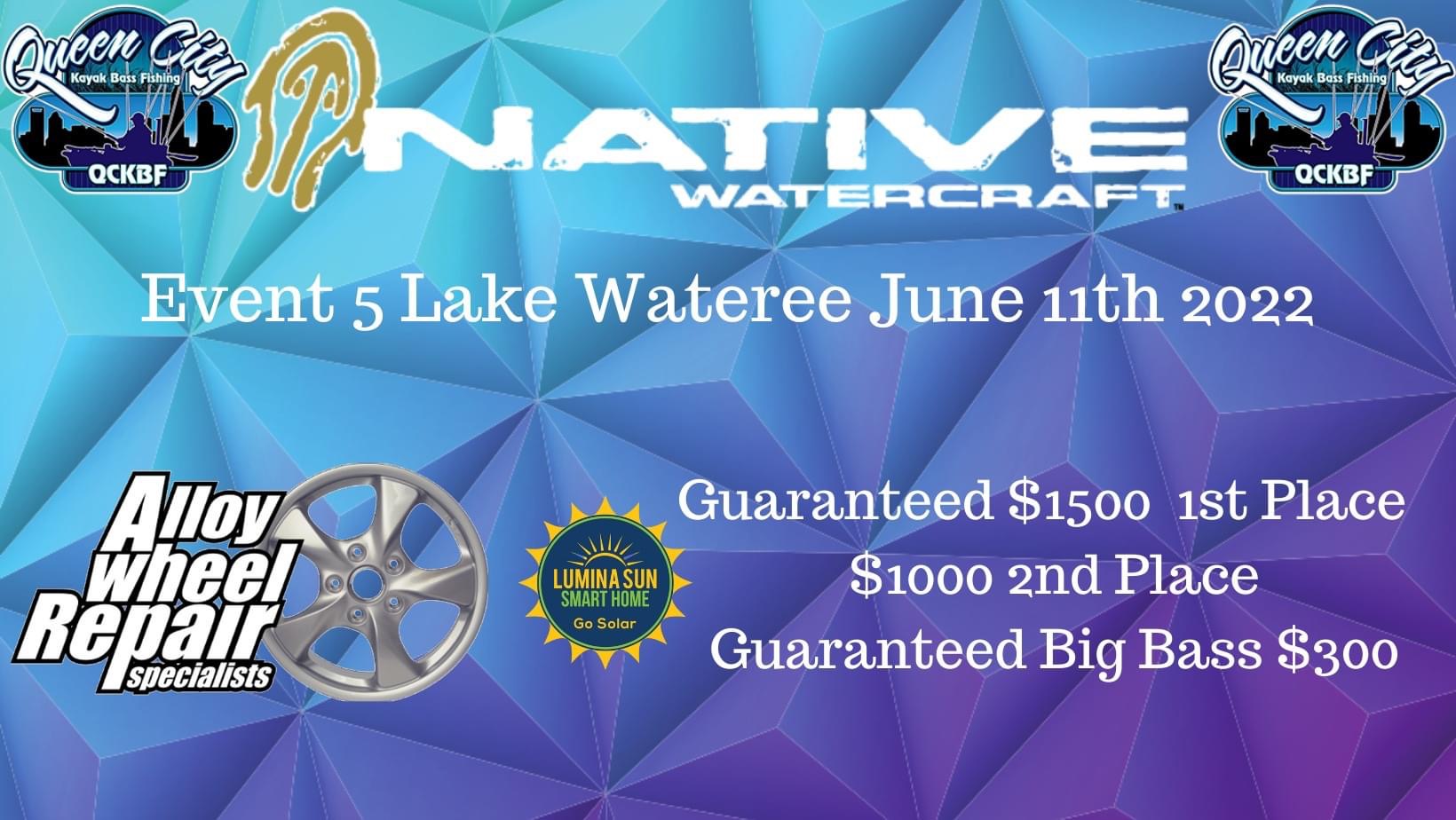 Congrats Chris Goodwin on taking home the title and $1500 today!
Congrats Larry Wood on the Lumina Sun Smart Home 2nd place and $1000.
Congrats Kyle Hancock on 3rd place and $846.
Congrats Kinley Martin on 4th and $529. Kinley was also the highest finisher in a Native Watercraft, earning another $50!
Congrats Nick Huddleston on 5th, the Academy Sports + Outdoors Elite win, and the Rock Outdoors Team win for a total of $1095!
Congrats Chris Gravely on 6th and $317.
Congrats Buddy’s Marine on 7th, beating Chad Walden and earning $253, + one signed dollar.
Congrats Teng Vue aka, Flippin, on 8th and $211.
Congrats Jeremy Heath on 9th and $169.
Congrats Yee Hang on a top 10 and $100.
Congrats Jay Park on your Emerald School of Excellence Big Bass, and Team win, plus the Tudor Home Services bubble boy for a total of $375 and a free July event.

Congrats Skip Lohmeyer on the Sugar Creek Coffee Roasters small bass with an 8 incher worth $165.

The NeoGenix Angler of the Year race is taking form after 5 events. Don’t forget, we drop your lowest three events so right now, nothing is even close to in stone! Keep fishing hard and I will see you all next month for our Catawba Clash! 9 Lakes open across the Carolina’s. If you need anything from me let me know! 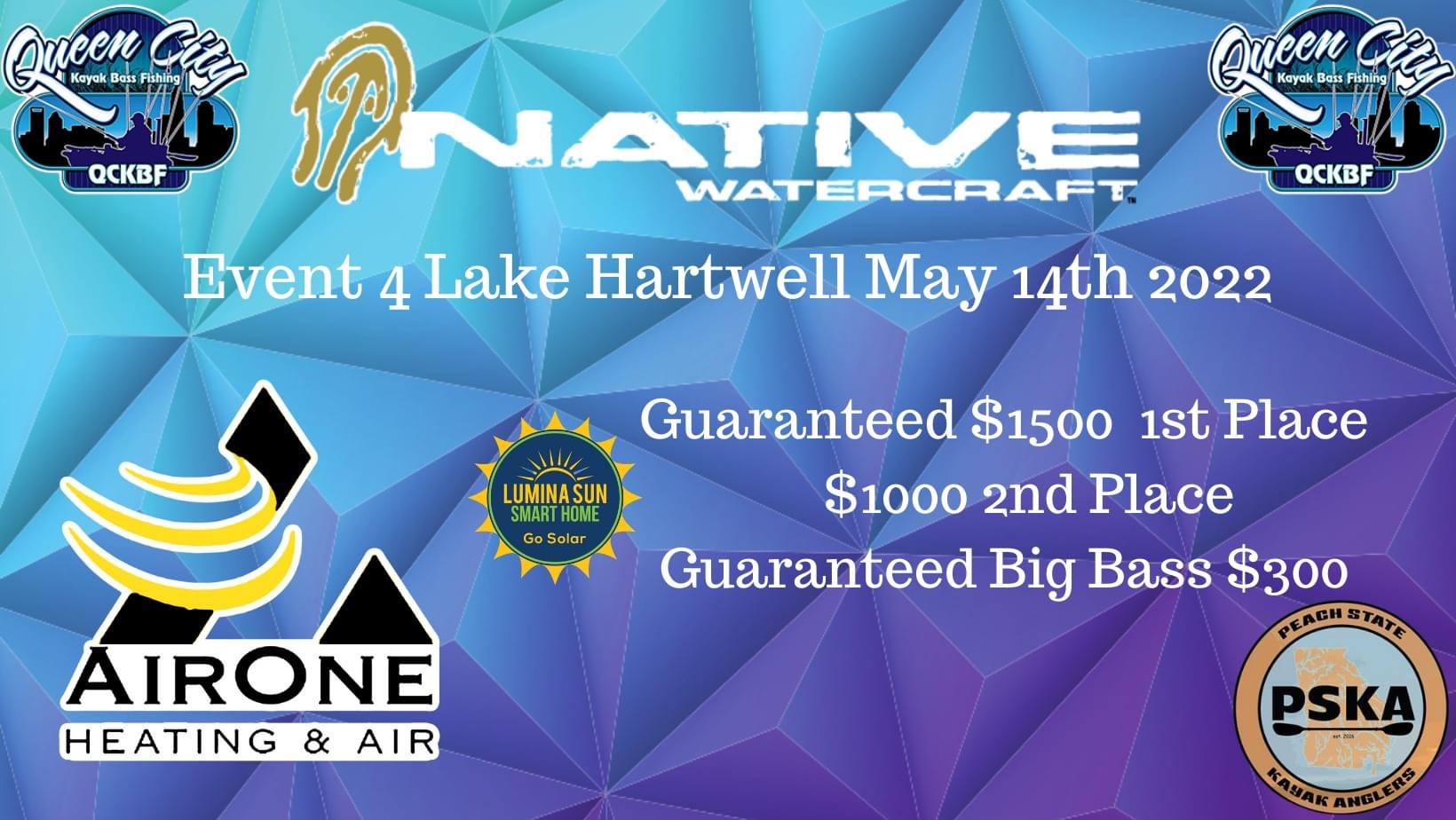 We had a great day today down in Visit Anderson SC!! AirOne Heating and Air brought us back for another round on Lake Hartwell, and we brought the Peach State Kayak Anglers with us! We had 148 anglers fish in some amazing weather today. We had a great venue at the Hilton Garden Inn of Anderson and Neil Paul made sure us kayak guys and gals, were very well taken care of! I love coming down here not only as an angler, but also a director. We are already planning 2023!

I had a feeling that the fishing should be on fire today, and for once, I was right. We had 531 fish come through TourneyX.com, and anglers reporting catching between 20-40 fish all day long. Report of large wolfpacks up shallow containing 5 pounders, and huge spots out deep over points and ledge’s made for anglers catching big bags today! Before we get into the full recap I want to thank every person who is involved with Queen City Kayak Bass Fishing. The amazing sponsors for keeping us the best paid club around. The sponsors for filling the table. About 60 anglers went home with a prize today. My team, both on site, and behind the curtains. You all for fishing. EVERYONE!

Another huge thank you to all the anglers who came and fished from both clubs. I loved bringing two clubs, and two states together for some fun today! Lets do it again in 2023!! 🙂

We have our 5th event of 2022, June 11th on Lake Wateree. This event will have a virtual weigh in. We will consider making it a longer fishing day since we wont have a venue, food, weigh in. Come hang out! 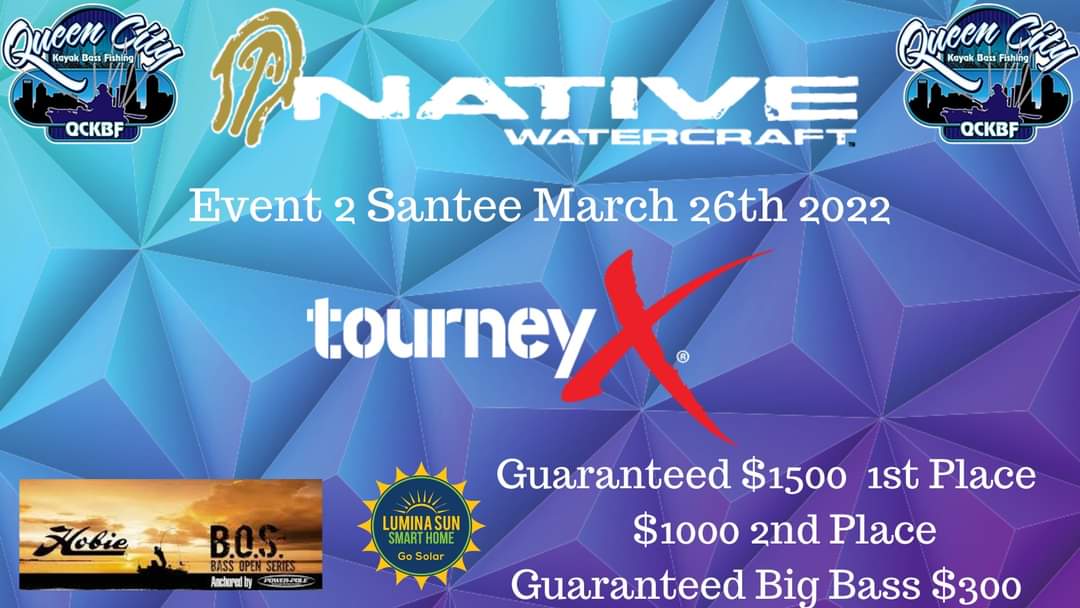 What a great event today on Santee! We fished along side the BOS event and had 200 anglers on the QC side! Thank you TourneyX.com for sponsoring this event, and thank you to all the anglers for supporting the club. I want thank Jesse and Justin from Clarendon County Chamber of Commerce for supporting both clubs and making sure we had a great weekend.
Mother nature messed with the lake bad over the past week and capped it off with 30-40mph winds today. Horrible conditions across both lakes made for some tough fishing. We had 337 fish submitted today, with 41 limits and 82 skunks.

Thank you Native Watercraft for bringing us QCKBF 2022! It has been an amazing start! We are rolling into the Yadkin Yolo in a few weeks! Come see us at Rock Outdoors! A huge shoutout to the 80+ prizes on the table today! Huge shoutout to Aaron’s Baits for coming to hang out and make sure everyone went home with some bonus baits!

Thank you team! Thank you judges! 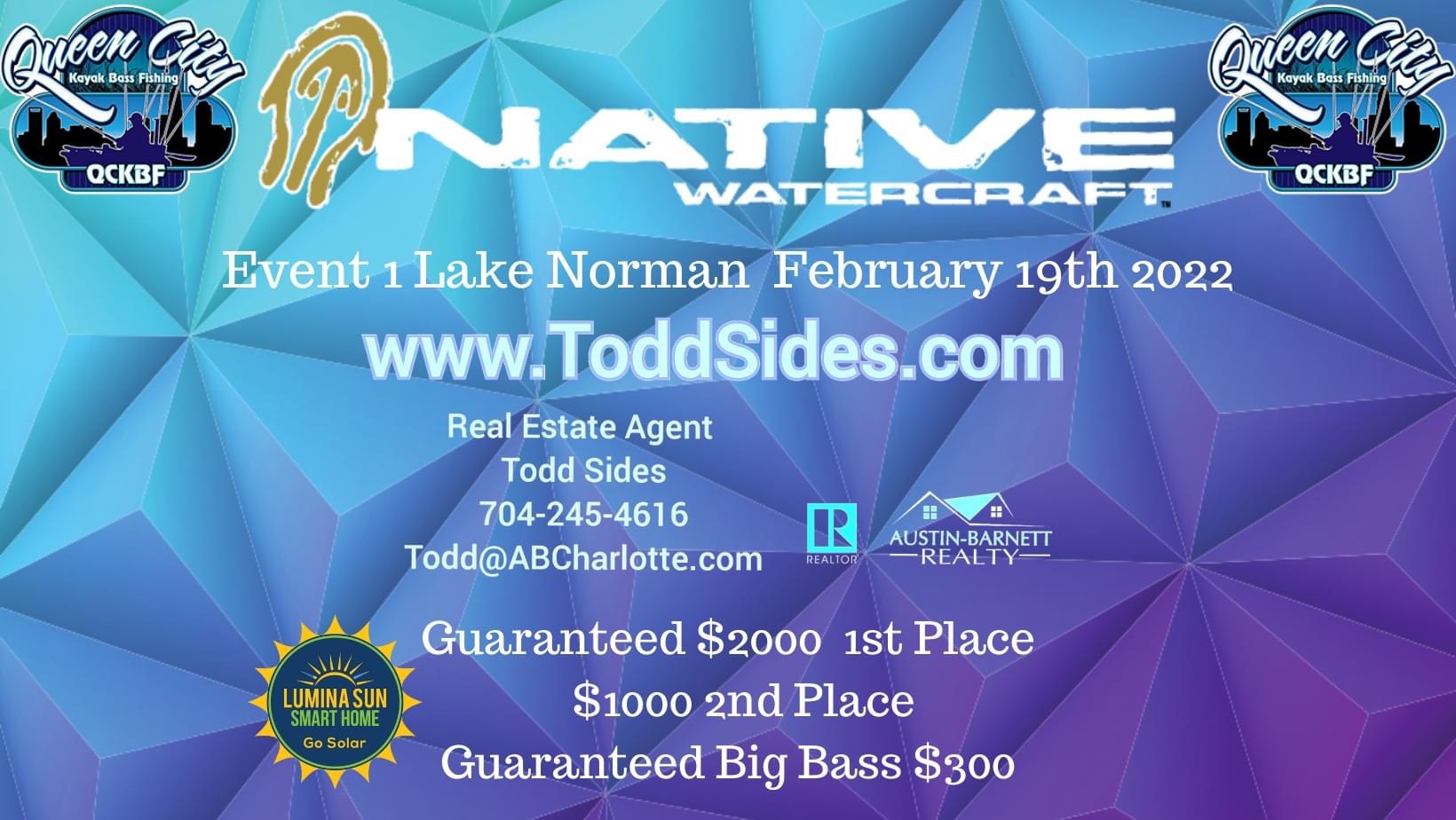 Season 8 started off with a bang on February 19th 2022. We opened the season on Lake Norman with the support of Visit Mooresville and The Pit Indoor Kart Racing. 146 anglers signed up for the event which was our season opener record and also the Queen City Kayak Bass Fishing stand alone event record. We have had higher, but it included a double dip event. Native Watercraft was excited to make this the largest season ever and we are off to a good start! Todd Sides Real Estate Agent NC was our presenting sponsor for Event 1 and he has been super excited for that opportunity for a long time. The weather yesterday was a mixed bag, as was the fishing. The morning started off cool and calm with bright sun. Anglers were choosing where to fish from the 11 Lake Norman ramps. Most were anticipating high winds in the afternoon, and we taking that into consideration. The weather changed for the worse around noon. The wind kicked up, creating some tough conditions, but also led to the fish turning on and the actual fishing improving for most of the field. We fished from 8:00-4:00pm yesterday and then over 100 anglers met at The Pit for a weigh in ceremony with food, drinks and snacks. I was lucky enough to be on a media boat captained by Wes Cloninger. I hired a professional photographer and we drove all over the lake take amazing shots of the anglers. Those pictures will be released tomorrow. Mary Ferreri and William Benini were judging fish all day, start to finish. We ended the day with 146 anglers, 334 fish, 39 limits and 40 skunks. I was on the Carolina Kayak Lunker Hunters Podcast last week and I said on the show we would see some big bags this weekend on Norman, and I think I was right.

Risen Son Custom Lures donated a free entry for the Santee Event and Trent Davis won it but is unable to use it. We re-ran it, Jeff Travis is our new winner. Congrats!!

Thank you so much to all the anglers who call QC Home!! We are blessed to have a group of people around us as awesome as you. Thank you to all the sponsors who support us. The table was so packed again that EVERY ANGLER in the room, which was over 100, went home with a prize!! Thank you judges, captains, photographer’s, website creator, YT creator, IG creator, everyone who has a hand in this QC thing! I couldn’t do this without you all!

Lets keep this train rolling into Jurassic Park. We will be on Santee on March 26th with the Hobie BOS – Bass Open Series crew. We are lucky enough to have the opportunity to double dip with AJ Mcwhorter and them Hobie boys. I know about 80 of us got into the BOS event, and I anticipate many of them coming to the QC side. I am seeing 250 anglers for this one!!

Have a great weekend!! 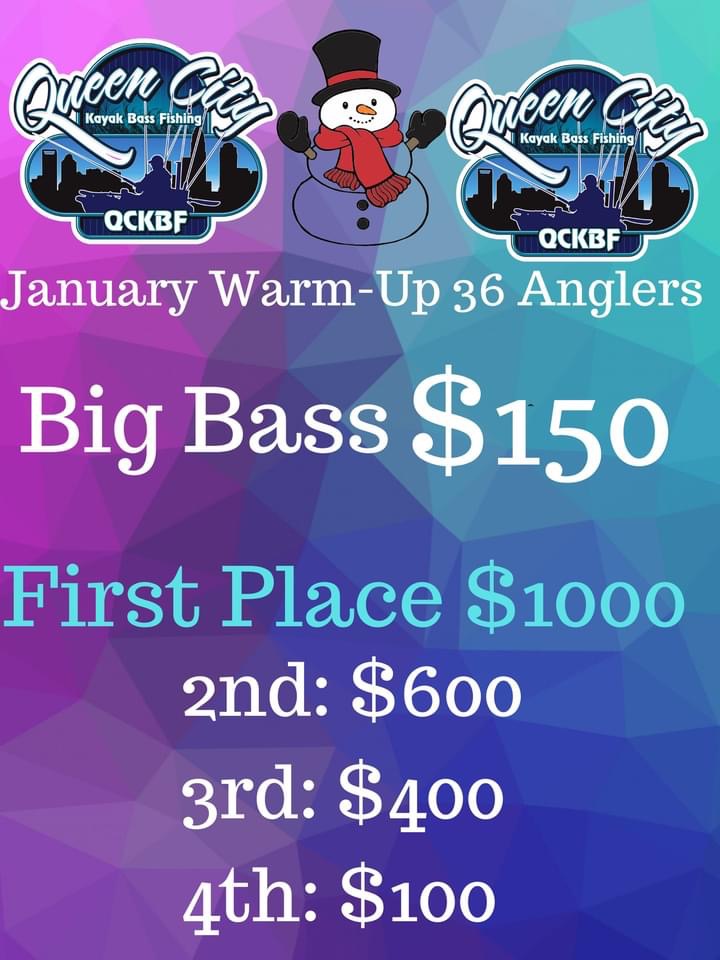 Great day today for the Warm Up. Congrats to our winners today. We had 36 anglers but Joey Sullivan proved he was the man to beat. He took home $1000 with his 72.5 inches, including a 21.75 kicker!

Congrats all! The big dances start in a month! See you all at Norman! Thank you TourneyX.com for having us.